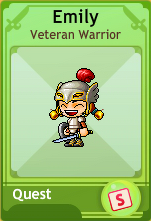 "A trustworthy ally that will stand by you no matter what! Your power increases when you are together."

The first NPC that every player will meet in the tutorial of maplestory adventures. She is also the first Maple Hero card you will receive to help you with your journey.

You can hire her just like other MapleStory Adventures friends, but she can be hired every 4 hours unlike normal friends. She will level up accordingly to the level of your character and have the equipment and skills to match. After a game upgrade, she now has 45 Energy to support you, instead of her previous Energy of 20.

Emily's pet is a Pink Bunny. Her skill to support you in battle is called Charged Blow.

Emily used to be in charge of the Tutorial quests, but because she was a slacker, she got kicked out and got replaced by Neinheart! 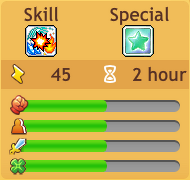 Retrieved from "https://maplestoryadventures.fandom.com/wiki/Emily?oldid=24281"
Community content is available under CC-BY-SA unless otherwise noted.