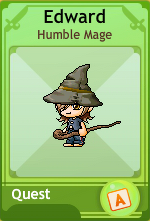 "A calm and earnest Magician. He brings you a Magic Stone when summoned."

Edward is the second NPC friend that you can obtain, with Emily being the first you start off with. Edward is a Magician who stays a constant 3 levels behind your current level. He can be hired once every 2 hours with 20 Energy to attack with. Hired friend's appearances will change according to their level. They will don new gear, fashion items, and even pets. At some point Edward will have 45 Energy to support you, instead of the regular 20.

Edward's pet is a Brown Kitty. The skill he uses to support you in battle is called Energy Bolt.

How to Obtain[edit | edit source] 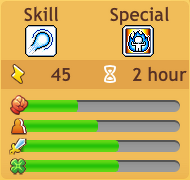 Retrieved from "https://maplestoryadventures.fandom.com/wiki/Edward?oldid=22567"
Community content is available under CC-BY-SA unless otherwise noted.