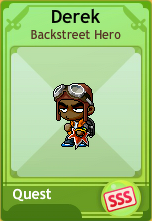 "A somber, reserved Thief. He lets his skills do the talking."

Derek is the third NPC friend that you can obtain. Derek is a Thief who stays constant of your current level. He can be hired once every 6 hours with 20 Energy to attack with. Hired friend's appearances will change according to their level. They will don new gear, fashion items, and even pets. At some point Derek will have 50 Energy to support you, instead of the regular 20.

Derek's pet is a Mini Kargo. The skill he uses to support you in battle is called Double Stab.

How to Obtain[edit | edit source]

To become friends with Derek, complete the Friends with Derek quest chain. These quests are given by Emily and can only be activated after many of Neinheart's quests have been completed. 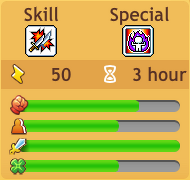 Retrieved from "https://maplestoryadventures.fandom.com/wiki/Derek?oldid=21832"
Community content is available under CC-BY-SA unless otherwise noted.